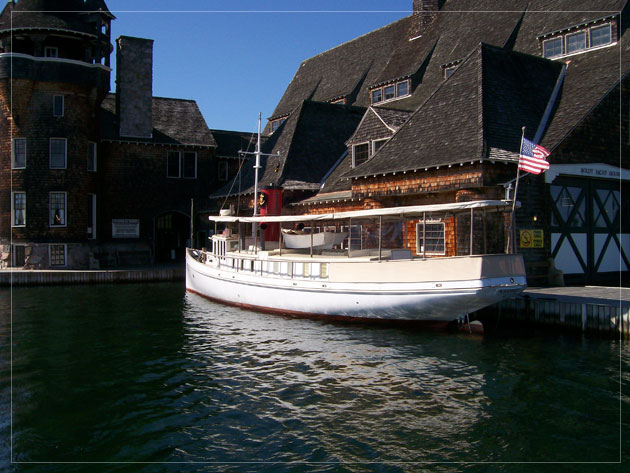 In the late 1800’s just before the dawn of the gasoline era many private steam yachts plied the waters of the St. Lawrence and Hudson Rivers, Long Island Sound and many large lakes in the region, including the Great Lakes.

The Kestrel was designed by D. Crawford and built by George Lawley at his South Boston shipyard in 1892.  Her first owner is not presently known, but the first available written records indicate that she was sold on June 14, 1899 to Samuel Keyser of Baltimore, Maryland.  After a succession of owners who lavished money and care on her, she was sold to James A. Trowbridge of Norwalk, Connecticut on February 19, 1937.  Mr. Trowbridge enjoyed her for nearly 33 years and her ship’s log shows  many short trips up and down Long Island Sound with a favorite stop at Northport, Long Island.

Records show an overhaul and some replacements in 1957.  Her original boiler was replaced first in 1926 and again in 1967.  In 1972, she was sold to Robert P. Scripps of New York, and appeared in the New York Harbor for the 1976 Parade of Tall Ships.  She was then sold to the American Maritime Academy on Staten Island.  The American Maritime Academy used for a few years and then abandoned her.  In 1988 she was acquired at auction by Mr. John H. Luhrs of Ponte Verde, Florida.

After purchasing the Kestrel in 1988, the owner chose to have the steam engine completely repaired by the renowned Conrad Milster at his boiler room at the Pratt Institute in Brooklyn, New York.  In 1990, she was taken to Kettle Creek Yacht Services at Tom’s River for final finishing.  Some of the individual items that were salvaged and could be reused were her 1967 boiler and cylinder blocks, part of the engine shaft and assorted hardware.  She now has four pineapple finials atop her compound engine. 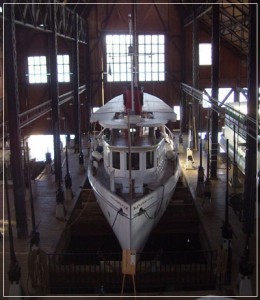 Her interior has been completely redesigned and painted white.  She has sixteen “Wylie” ports with decorative wedges, ten 22-inch deck cleats, and a compound curved sliding hatch on the forward deck.  Her outward appearance shows a semi-permanent canvas awning with roll-down protective panels around her fantail stern.  Her new five foot stacks displays Mr. Luhr’s private signal and brass decorative dolphins adorn her railends.  Her capstan is original, while her galley has all modern conveniences and the head has a very unique brass faucet with shower attachment.  During a period of five years Mr. Luhrs completed her final restoration at St. Augustine Marine Center in Florida.

The steam yacht Kestrel is representative of the period and vessels owned and operated by George Boldt.

On July 30 of 2009 Mr. Luhrs generously donated the Steam Yacht Kestrel to the Thousand Islands Bridge Authority for permanent display at the Authority’s Boldt Castle Yacht House facility for the enjoyment of present and future generations.