The Thousand Islands Bridge Authority, owners of historic Boldt Castle and the Boldt Yacht House continues with its progression of improvements at the Boldt Castle Facilities. Visitors continue to enjoy the restorations made to the properties and the structures over the years. Staff works continuously on both upkeep and restoration of these facilities.

With the restrictions and delayed start to the 2020 season, our construction and maintenance crew was occupied with daily maintenance tasks. We look forward to completing the Channel Side Fountain for new and returning visitors to enjoy. New projects will resume in the near future.

The Channel Side Fountain located on the south facing side of Heart Island underwent a dramatic transformation during the 2019 season. This water display was not a previously existing part of the Heart Island structures but plans for a fountain in this location were in the original construction blueprints. Boldt Castle Craftsmen began construction of the fountain by demolishing and leveling a raised flowerbed that was in the location of the original fountain footprint. A concrete slab was poured, and water systems were installed to mimic cascading waterfalls when in operation. The focal point of the fountain is a 3’ x 4’ oval adorned with 19th Century Venetian style dolphins and a “B” representing George Boldt’s insignia. All exterior granite masonry used on the fountain was found onsite at Heart Island and hand cut. If you look closely, you may even see a granite heart hiding in the stonework! The only remaining work on the project is completing a pavestone walkway to the fountain which will surround an inlaid Boldt crest paver. This additional display will add a tranquil element to the visitor experience and provide another idyllic photo opportunity for guests.

Boldt Castle Craftsmen continued their extensive work on the Alster Tower Café beginning the year with building a new exterior entrance door for the Café. Staff installed laminated glass in the seven new oak window frames built in the Boldt Landing shop and installed the windows in the summer months. A large curved oak interior top pocket door from one of the main entrances into the Café was restored. Work also began on the original mechanical system to operate the pocket door and the scissor-type hardware and the door were reinstalled in September.

The room’s interior was framed followed by the installation of tile backer board and plaster board. Subfloor was placed and the installation of the unique gutter system was completed in July. Over the years, Alster Tower’s stone exterior received widespread improvements including repoint, epoxying, grouting and water sealing. Despite these numerous updates, water is still absorbed through the facade and leaks into the interior. Craftsmen developed a gutter system that sheds all water that enters the ceiling to the exterior walls and basement. This greatly reduces the amount of water damage and repairs required to the Tower. Ceiling framing was completed in July and interior walls were built and installed. Decorative ceiling panels were installed over the framing in September. Period fixtures including lights, sinks and plumbing equipment were selected for the Café. 2019 winter work included restoring the original ice box and general millwork for the Café. Restoration also began on the original cook stove hood. Craftsmen began work on a custom maple frame and support for the cast iron sink and also produced a maple worktable for the display space.

Original, but damaged wall tiles found in the room were duplicated by a local artisan. The five different Dutch-inspired scenes include ships, windmills and picturesque villages. These 6×6” tiles will be installed along the chair rail above the wall tile. Additional wall and floor tile selections were made for spring 2020 installation.

Construction of a new wastewater treatment plant for the Boldt Facilities began in September 2019 and was wrapped up in the late fall of 2020. While this is not an update visible to the public, this new plant will replace the old system and streamline waste removal from the Island through a more efficient and sanitary process better suited for the high volume of visitors received by the Castle and Yacht House.

The first floor living quarters of the Boldt Yacht House are also open for viewing providing visitors with an exceptional experience as they tour this very special river landmark. The Boldt Yacht House contains antique boats, many displays, signs and pictures of boating and yachting on the St. Lawrence River. The Boldt Facilities work closely with the Antique Boat Museum to exhibit a collection of antique boats representing a grand era of boating on the St. Lawrence River.

In addition, the Boldt Facilities is slated to receive a new wastewater treatment plant. This extensive development is projected to be completed in 2020.

During the Authority’s 42 years of ownership of the former Boldt properties on Heart Island and the Boldt Yacht House on Wellesley Island, millions of dollars have been invested in rehabilitation and improvement efforts. At the same time the Boldt Facilities have hosted over 1,100 weddings and have counted over 7 million visitors to these historic properties providing the 1000 Islands International Tourism Industry with a substantial asset and demonstrating the Authority’s long-term commitment to improve and preserve these landmark properties for present and future generations to enjoy.

In the past years numerous improvements have been accomplished, including rehabilitation of the Power House, Dove Cote, Heart Island Gazebo, Alster Tower, the Boldt Castle Yacht House, the main castle, and the Heart Island Entry Arch which is adorned with three, seven-foot tall stags (or deer) which are symbolic of the Boldt family crest.

The most recent improvements and completions to the main castle include George and Louise Boldt’s and daughter Clover’s Bedroom Suites located on the second floor of Boldt Castle. Past interior projects that have been completed include the Dining Room, Ballroom, Library, Billiards Room, Reception Room, installation of the Boldt Castle Elevator, completed Grand Stair Case and the Stained Glass Dome in the upper ceiling.

Another feature to Heart Island is the completely restored overlook, consisting of an elaborate 170-foot granite retaining wall on the island’s terraced grounds. The retaining wall and overlook are reinforced poured concrete punctuated with turrets and faced with native granite stone.

The Boldt Castle Theatre is located on the second floor of the Castle. Guests are invited to watch a new short movie on the life and times of George C. Boldt, Boldt Castle and the 1000 Islands.

The Hennery or “Dove-Cote” Before & After: 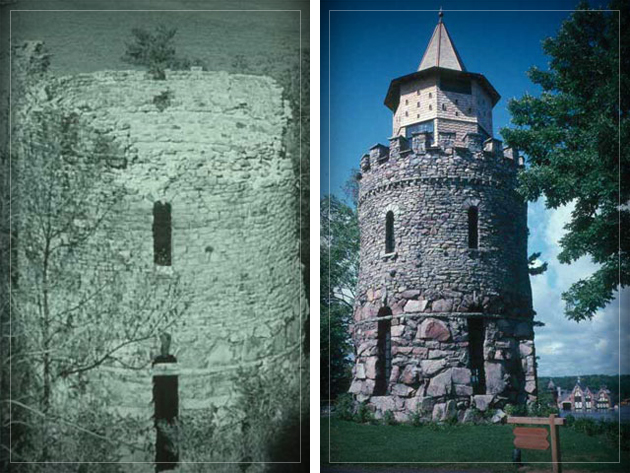 The Grand Staircase & Hallway Before & After: 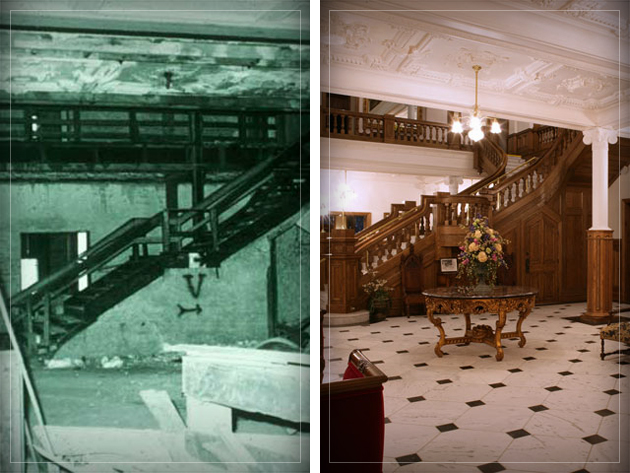 George Boldt’s Bedroom Before & After: 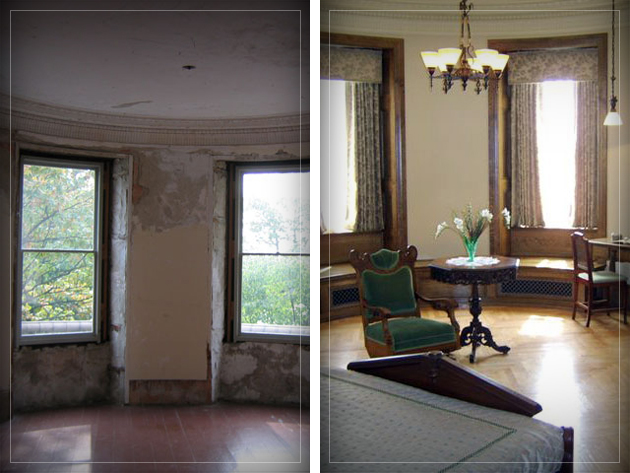 Gazebo Renovation Before & After: 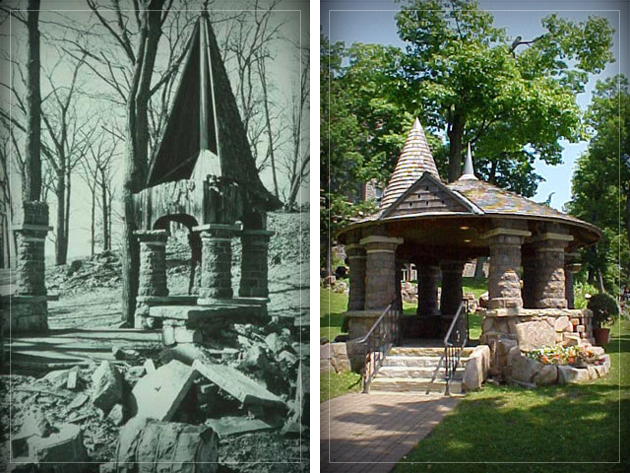 The Powerhouse Restoration Before & After: 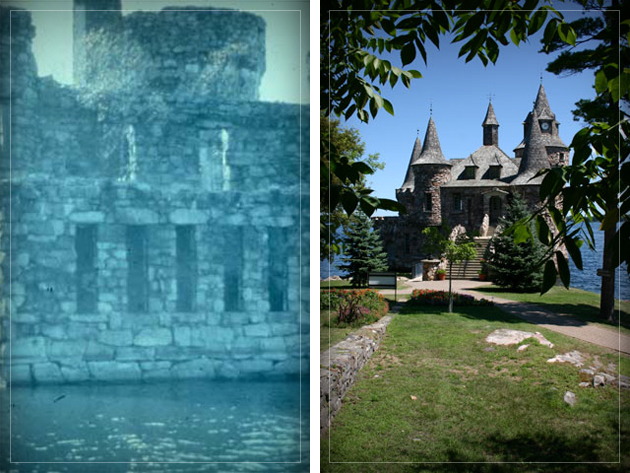