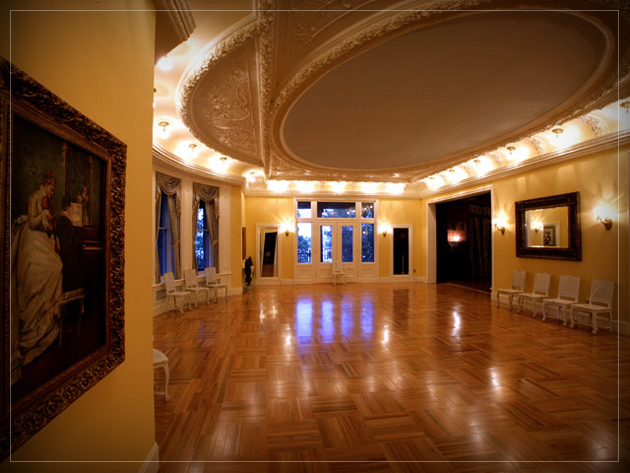 The ballroom is one of the most elaborate spaces in the castle, adorned with state of the art crowned molding and designed with dramatic lighting used to illuminate what should have been many evenings of entertainment on Heart Island. The architectural design of the room was intended to capture the acoustics of live music, a feature the Boldt’s never had a chance to enjoy.

The original plans for the ballroom called for an organ to be installed in the small landing. On display today is a donated Estey reed organ. The original cottage on the island housed a keyboard that connected to a switchboard in the Power House, capable of playing the chimes in the tower. It is likely that the castle’s organ would have been equipped to do the same.

The ballroom was restored to its present condition in 2005. 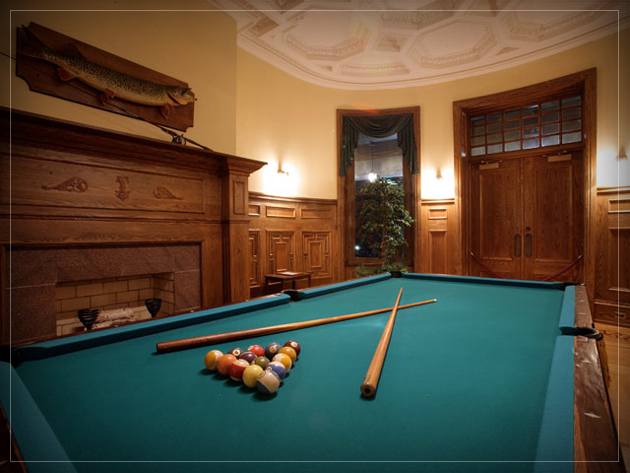 Billiards, politics, cigars and brandy were all key ingredients to an upper-class gentleman’s good time. As a hard working businessman, it is not surprising to see that George Boldt occasionally indulged in a bit of fun. It was traditional for men of that era to discuss potential business partnerships or transactions within a secluded, yet informal setting, such as a billiard room.

The billiard table on display accompanied by cue set are original Brunswick Company pieces that were restored by a Brunswick Company affiliate, who replaced the green felt and reconditioned the inlays and ornamentals on the table.

The original plaster ceiling was partially intact when the Bridge Authority received the property. The billiard room was completely restored in the early 1990’s. 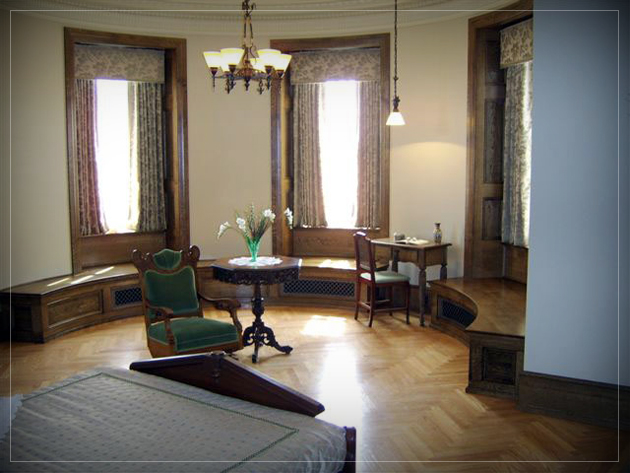 George Boldt’s suite is appropriately simplistic in its accommodations; as a man who would have spent most of his time entertaining guests, planning new architectural projects and boating on the St. Lawrence River. The occasional vacation spent on Heart Island would have rarely been secluded to the bedroom.

As master of the estate, George Boldt would have had a personal valet, whose duties included tending to George’s wardrobe, grooming needs and completing personal requests, such as delivering private messages or letters.

Each family suite was designed to include closets, a personal bath and a private entry onto the second floor balcony.

The rehabilitation efforts of the grand hall is one of the Bridge Authority’s greatest accomplishments. The area is completely unrecognizable today compared to when the property was first received in 1977.

The stained glass dome was only an empty steel frame, the Italian Carrara marble for the staircase and hall floors was never installed and the subfloor was covered in dirt. Fortunately, part of the original plaster ceiling was completed and somehow survived through the years of abandonment, allowing contractors in 1995 to cast replica molds demonstrating the authentic craftsmanship of the era.

In 1999, the grand staircase was completed, followed by the installation of the marble floor, oak millwork and completion of the stained glass dome in 2001. On display throughout the grand hall are several pieces of the reproduction art works, with the exception of two original water color paintings of the island by Philadelphia, Pennsylvania artist Frank H. Taylor. Frank Taylor was an illustrator and writer for Harper’s Weekly and likely knew George Boldt. 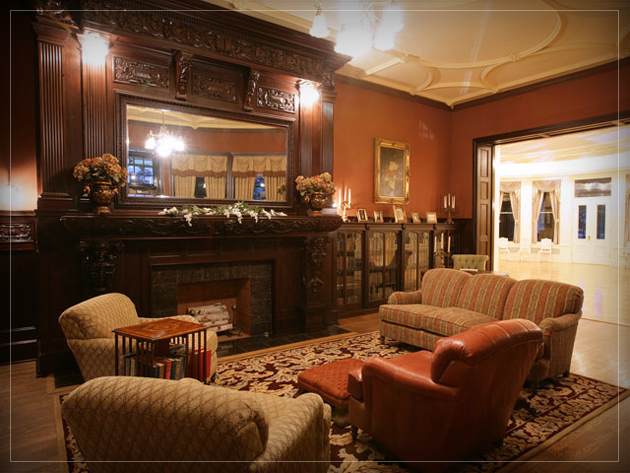 George Boldt was truly dedicated to a life of learning. He was also known to read books late into the evening in his study before retiring to bed. His Waldorf-Astoria office appeared to look more like a small library that a place of business. Close friends of George believed he could have easily been successful as an engineer, lawyer, artist or musician. Boldt was heavily involved in the architectural planning of both his hotels and construction of his homes. He would often attend meetings with his hired engineers. He even took up a study of French irregular verbs right before the time of his death.

Although George and Louise’s children were nearly adults upon construction of the castle, the atmosphere of the library cultivates a child-like creativity. It is likely that George Boldt had this area built with his future grandchildren in mind. Manifested in the original mahogany wainscoting are images of fairytales: a genie’s lamp, a pirate ship and even an image of Boldt Castle itself. It is believed that the detailed wood working on the American chestnut fireplace mantle tells the story of Hansel and Gretel, the Brothers Grimm fairytale originating from Germany. If you look closely, there is a young boy and girl on opposite sides of the fireplace and a haggardly woman with a very “witch-like” nose centered directly above the fireplace. As the old tale goes, Hansel and Gretel are lured into a home in the woods made of candy and sweets, only to discover that they are tricked by an evil witch who planned to eat them. The story ends with Hansel pushing the witch into the very oven she planned to cook the children in. It is not surprising that the story he likely heard as a child found its way into the theme of the library.

The books on display in the original bookcase were donated by the Flower Memorial Library of Watertown, NY and the Macsherry Library of Alexandria Bay, NY.

In 2014, the great-grandchildren of George and Louise Boldt also donated family owned books with individual family signatures on their collection of Charles Dickens novels and other classic literature, which is now available for display.

The library was completely restored and opened to the public in 2004. 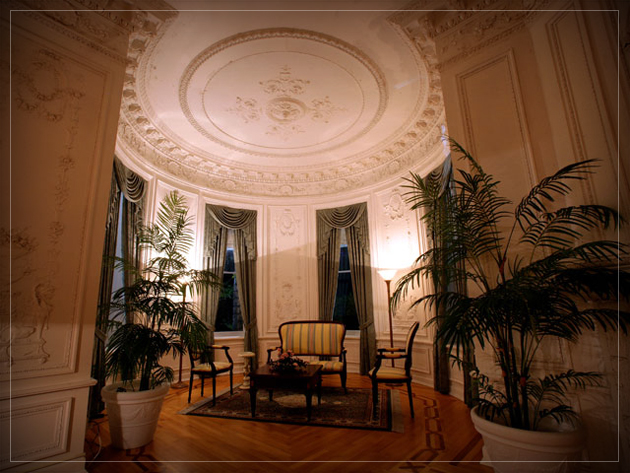 Had you been a guest on Heart Island, the reception room is where the Boldt family Butler would have cordially beckoned you into the the grand estate. All personal belongings would have been swiftly sent away with the footman directly to a freshly prepared guest bedroom suite. After being offered a series of refreshments, tea and coffee, Mr. and Mrs. Boldt would have arrived to formally welcome you into their home. The reception room provides just a glimpse into the lavish lifestyle of the Boldt’s. Originally completed in 1904, this room was restored and opened to the public in 1993.